This weekend in Ontario was a long one (thank you commonwealth) and because I am lazy and the weather is nice, I decided to have a movie marathon inside, rather than venture out into the sunshine.

I’ve had a bit of a hunger for Action Movies since Saturday night’s visual expolgasm in the form of Mad Max Fury Road. Talk about edge of your seat action. That is the first movie I have seen since Avatar (which I saw 3 times in the cinema, fuck off haters – that shit was excellent) where I have walked out and thought, I need to see that on the big screen again…like right now.

But I’m poor and cheap tuesday is around the corner, so instead I turned to the library of movies available to me. I threw some popcorn on the stove (because I’m vintage like that) and settled down to the following movies (none of which I had seen before):

I like to pretend that there is only one guy out there who makes those movie bullet exploding packs (which google tells me are called Squibs – which is incidentally also the name of non-magical people born into wizarding families according to JK Rowlings Harry Potter….) 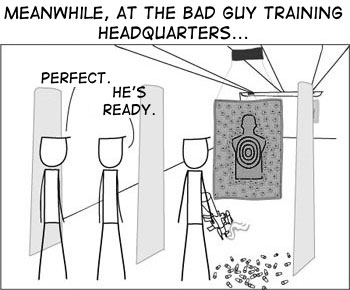 What I’m alluding to with my horrifically written dialogue above is that in all three of the movies I saw today and to some extent Mad Max on Saturday, the ratio of bad guy bullets and the amount of bullets our hero’s take, seem to be like 1000:1. I get that it’s an action movie, it is a bit of suspended disbelief, but honest to Betsy! I’ve never shot a gun in my life and I’m pretttttty sure I could have killed Bruce or Sarah Connors at some point with all the chances I had.

Another thing that really got to me today was how easily things exploded. Okay not Reservoir dogs which is a lot of talking in a warehouse, but Die Hard and Terminator Two?! I swear to god Bruce or Arnie so much as looked at a thing and it exploded. How much did they spend on pyrotechnics on those films? A bucket load I bet. Mad Max also had a lot of gratuitous fire and explosions, I suppose that is to be expected in a 2.5 hour long car chase through the desert. An utterly ridiculous and yet popular part of Mad Max was the guitarist propped by cables on the front of a vehicle in his red onesie, shredding a guitar that randomly spouted fire. There I was thinking: you’re telling me gasoline is extremely valuable in this apocalyptic world and that guy gets to shoot fire out of his guitar?! Okay… I guess… I mean… I’m no warlord so…

And the final thing that struck me, and it is something that the makers of Austin Powers joked about in The Spy who Loved me, why, oh whyohwhyohwhyohwhy must they always tell each other how they are going to kill each other. Why does John McClane tell the Germans when he’s coming up the tunnel behind them? Why would you do that knucklehead? Now they’re going to run, you dumb idiot?! Why does Vic Vega talk to the captured policeman. I didn’t know what was going to happen… But I knew somebody was going to stop him. Such ARROGANCE enjoying the moment, talking it out… just do it already!

I love action movies, don’t get me wrong. Maybe my brain was scrambled by watching too many in a row. They sort of started to feel formulaic, like you knew the explosions were going to happen, someone was going to end up looking bloody and beaten, and a character you liked a lot was going to fall into some dire situations.

But the part where I suddenly thought…okay well thats enough of that genre for a while, was The Terminator…being lowered into a pit of boiling… metal I guess? Giving the thumbs up as his final gesture…. Are you serious right now?

Bye bye – just kill me even though I admit I feel pain, and I got here from the future, but Nah, don’t send me back. It’s cool. Just melt me up. And the kids crying, and the mum looks distraught…. I just… hmmm.

Time for some Family Guy

One thought on “Cool guys don't look at explosions”